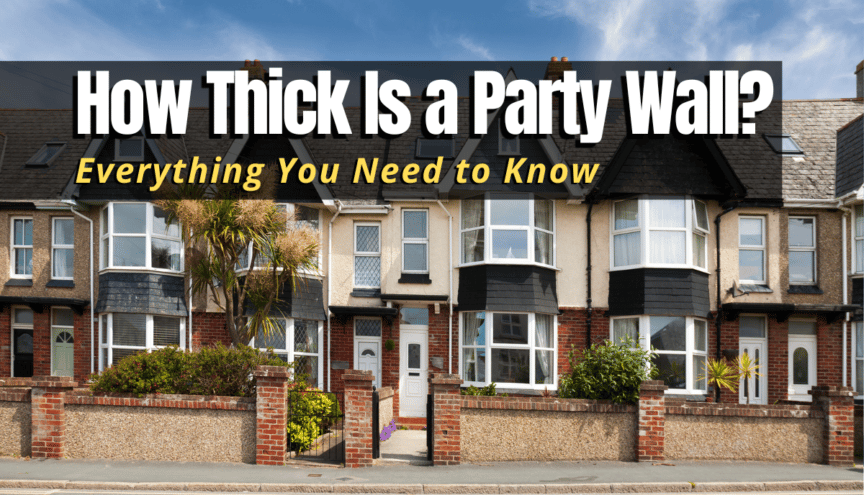 Party walls are an important structural feature in homes. They separate you from your neighbors and provide structure for the building. The thickness of a party wall has a big impact on things like noise and fireproofing.

Party walls vary in thickness depending on when the property was built. In modern properties, they can be 10-11 inches thick, but can be as thin as 5 inches in old houses.

This guide will explain more about what party walls are and why they’re important, and explore the different factors that affect the thickness of the walls.

What is a Party Wall?

Party walls are usually almost always structural walls and when the properties are first built, the wall is placed so half of the thickness lies on each side. However, party walls can sometimes be constructed of two abutting walls (walls that touch). This is the case if a new house is built next to an existing one.

Party walls are sometimes known by other names:

What is the Minimum Thickness of a Party Wall?

The minimum thickness of a party wall depends on a few factors. The most important one is whether it is load bearing or not because, if it is, there are more regulations about the construction. Party walls between two buildings are often load bearing.

It also depends on when it was built and what method was used. Older properties, especially those from the Victorian era, are likely to have a single brick layer between the properties, so the wall is much thinner. In the UK, a solid brick wall is around 8.5 inches thick, while a cavity wall will be between 10 and 11 inches thick. However, load bearing walls in the UK must be at least 1 foot wide.

There are no specific regulations about the thickness and materials that can be used when constructing a party wall. However, they must meet these other regulations to ensure that the building is structurally sound. Unfortunately, this can cause issues in buildings where the party wall is not load bearing because it can be quite thin, letting a lot of sound through. 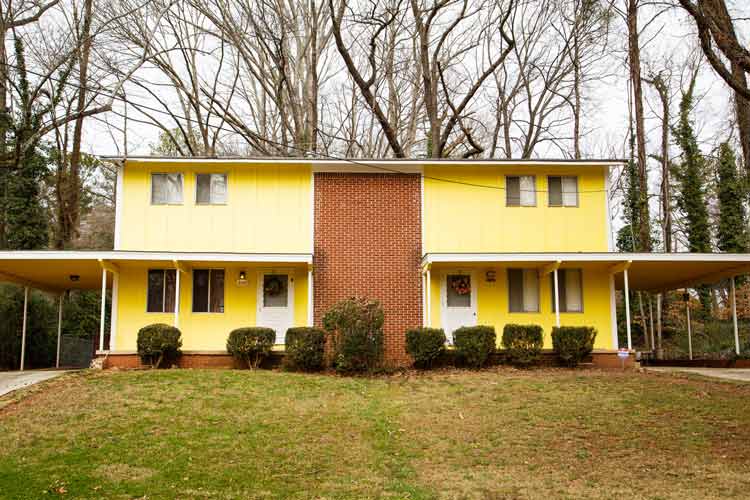 What are Party Walls Made Out Of?

This depends on what the rest of the walls in your house are made from and when it was built. In most cases, the adjoining wall will be a cavity wall made from bricks and breeze blocks. The cavity may be filled with some kind of insulation to keep the property warm and prevent sound traveling from one side to the other. However, some cavity walls are unfilled, and cold air can fill the gap and cause heat loss from your home.

Older properties built before the 1920s may not have a cavity wall. Instead, the wall will be solid brick, usually in two layers.

The interior wall could be constructed from a number of different materials, depending on the age of the house. If it was built from the 1940s onwards, it is likely that it uses drywall, which is screwed into the studs. However, older properties will use different methods like lath and plaster. Old plaster walls are actually better at blocking noise from your neighbors.

How Thick are Party Walls Built in the Past?

In the past, party walls were built much thinner. Before cavity walls became commonplace (during the 1920s), walls were often made from a single brick layer. A standard brick is 4.5 inches wide. With wall coverings on either side, this would make the wall around 5-6 inches thick in homes built in the early 1900s.

Once cavity walls became more commonplace, the thickness of party walls increased a lot. Cavity walls in the 1930s onwards were roughly 10 inches thick, and most party walls will have a cavity.

This depends on the construction. Having insulation of some kind between the wall gaps helps with soundproofing. So modern walls that have a cavity filled with insulation are excellent for soundproofing. However, an air gap will cause sound to echo and amplify, so unfilled cavities are nowhere near as soundproof, even if they are the same thickness.

A solid wall carries sound very well and needs to be around 10 inches thick to be soundproof. So, in old properties where the party wall is a single brick layer, it’s likely that you will hear sound carrying through. This problem can be rectified by installing soundproofing materials on the walls on your side of the property.

Yes, fireproofing should always be taken into account when party walls are constructed. Bricks have a very high heat resistance, so will slow the onset of a fire. If the party wall has a cavity with insulation, it’s likely that this will be a fireproof material too (fiberglass, for example). Older party walls that are not as thick and don’t have insulation will be less fire resistant.

Regulations about party walls vary from place to place, but many locations require a party wall to have a fire rating of at least two hours. This means that a fire could theoretically burn in one property without coming through the wall to the property on the other side.

Party walls are not always structural walls, but many of them are. The party wall offers structural support for both buildings. The easiest way to tell whether a wall is a structural load bearing wall is to see whether it is supporting another wall on top of it. In the case of a party wall, it extends up the full height of the building, so it is load bearing. However, in an apartment building, for example, the party wall may not necessarily be load bearing.

If You Are Building New What is a Recommended Party Wall?

There are a number of factors to consider when building a new party wall. Firstly, you should consider soundproofing. If you want to reduce sound coming through the walls, you need a large cavity of 5-6 inches in the middle. You can then fill this cavity with fiberglass insulation. Not only is this the best insulation for soaking up sound, it’s incredibly fire-resistant too. Avoid unfilled cavities because the air gap amplifies sound.

As a general rule, adding more mass to a wall will make it more soundproof. So, consider adding two sheets of drywall to the inside of the wall instead of one. Look specifically for type X or type C drywall as these are designed to be fireproof.

Unfortunately, there is not a huge amount of consistency in the thickness of party walls. Regulations about the thickness are very loose and depend on more general rules about wall thickness. In older properties, the party walls are likely to be quite thin, so you should consider making changes to improve soundproofing and fire protection.

Welcome to My Home Dwelling

Hi! My name is Jamie and this is My Home Dwelling, a blog where I have pieced together articles about all my home ideas. I have learned a lot while being a Realtor and a new homeowner, this website is all about me helping you with your home!

We are a participant in the Amazon Services LLC Associates Program, an affiliate advertising program designed to provide a means for sites to earn advertising fees by advertising and linking to Amazon and other affiliate programs. When you buy via the links on our site, we may earn an affiliate commission at no cost to you.