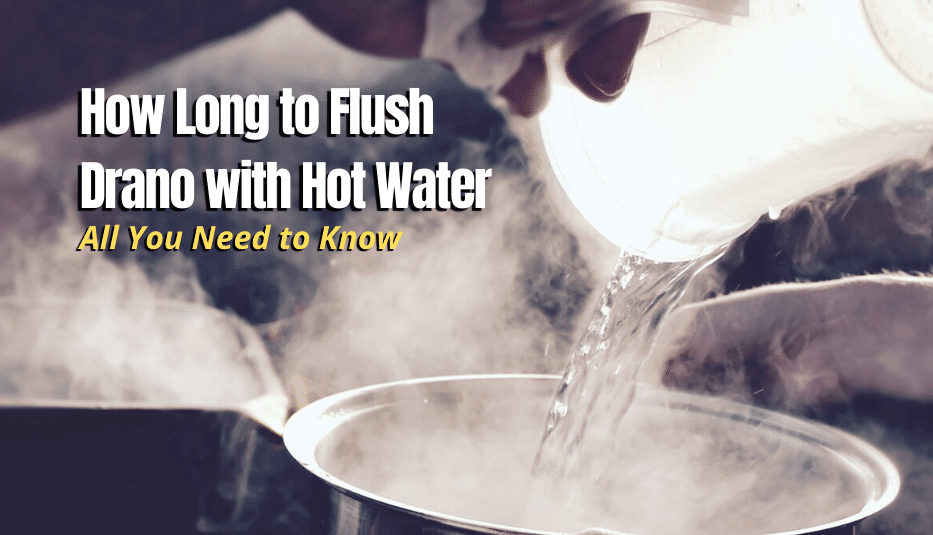 When it comes to commercial products, it can be difficult to know just how long you should wait before following certain steps. The same can be said of Drano, a popular clogged drain buster. How can you use the product best so that you maximize your results? How long to flush Drano with hot water?

You should flush Drano with hot water for five minutes or less, so long as you have allowed Drano to sit for 15-30 minutes prior to this. The hot water rinse doesn’t matter as much as allowing the product to sit for at least 15 minutes.

But will boiling water help your Drano work more effectively? And what can you do if your sink or drain remains clogged? In this article, we will endeavor to answer all of these questions for you and more. If you’ve had trouble getting Drano to work in the past, here’s a helpful guide to get this product working effectively.

Should You Pour Boiling Water After Drano?

You don’t need to pour boiling water after Drano, but you’re more than welcome to. It is important to know whether or not you have plastic pipes in your home, however, as boiling hot water can potentially melt certain types of plastic!

Boiling water often helps unclog stubborn clogs on its own, let alone after the help that Drano can do for you. Boiling water is just another helpful technique that is safe to use in conjunction with Drano! You can also use boiling water with coarse sea salt to help you break down clogs.

Boiling water is powerful on its own, so it isn’t a bad idea to use it after letting Drano sit for its proper amount of time. However, it isn’t necessary, and can potentially harm any old plumbing or plastic fixtures.

Can You Use Cold Water After Drano?

You can use cold water after Drano, but it may not be as effective as hot water in dispelling Drano from your pipes. The manufacturer of Drano instructs users to flush Drano with hot water; it doesn’t say that cold water won’t work, but it likely won’t rid your pipes of Drano as efficiently as hot water can. 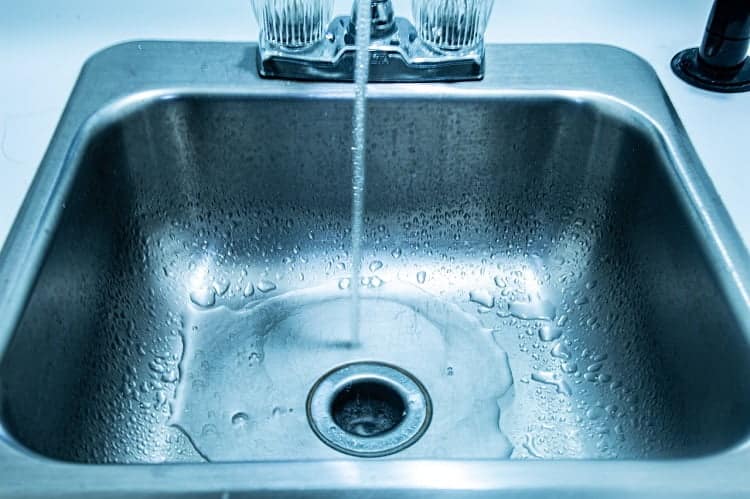 You can always try to use cold water after Drano, as it will likely still help cleanse your pipes of the product. Cold water is better than no water when it comes time to flush the Drano from your pipes! However, the product instructions mention hot water, so it is important to follow them.

Is it Possible the Water Won’t Drain after Using Drano?

It is possible that water won’t drain after using Drano. Chances are, you have a particularly stubborn clog, or perhaps you didn’t allow Drano to sit for a long enough period of time. However, there’s no good way to tell what occurred without having the ability to look down into your pipe.

Let’s talk more about what you can do if Drano doesn’t work for your clogged drain.

What to Do if the Water Doesn’t Drain?

If the water doesn’t drain from your clogged sink or shower, you can use another dose of Drano by pouring it down the drain through any standing water. However, it may suit you better to purchase a plumbing snake or hair catching mechanism.

Attempting to unclog the drain is very important, and you may need something stronger than Drano to break through. Drano works much more effectively when not used in conjunction with standing water, so if you are able to snake your pipes, this should be your next step.

What Happens if You Forget to Run Water After Drano?

If you forget to run water after using Drano, don’t worry. If you remember, try to run hot water through your pipes as soon as possible. However, nothing is likely to happen to your pipes in the time that you leave Drano sitting. The Drano may just not work as effectively without hot water involved.

If you are dealing with a particularly troublesome sink or clog and have used Drano frequently, you may want to avoid forgetting to run water. This is because Drano is composed of very powerful chemicals, and the more you use them on one particular spot, the more risks you take in terms of damaging your pipes. But more on that later.

Yes, Drano has been known to solidify in drains. Many plumbers cite Drano as the reason why snaking can be difficult for them, as Drano has the ability to harden like plaster in pipes and plumbing fixtures.

This is why it is especially important to only use Drano as directed, according to the product’s packaging. While the occasional forgetful moment will likely not cause long term damage, frequent mishandling of Drano can lead to even worse clogs in your plumbing lines.

If you are dealing with a clogged drain that ends up clogged frequently, Drano may not be the answer for you. Reaching out to a plumber that can properly snake your clogged pipe is always a good idea. While the upfront cost is much higher, hiring a professional may save you more money in the long run.

Is it Bad if Drano Sits in Drain for A Long Time?

It can be bad if Drano sits in your drain for a long time, yes. This is because the chemical makeup of Drano is powerful enough to damage your pipes if left unattended for a long time. This damage can also occur through multiple uses of Drano, month after month.

While we are all forgetful from time to time, letting Drano sit in your pipes for longer than 12 hours can lead to unnecessary damage. This is likely something that you want to avoid, so always be sure to flush Drano from your pipes after 15 minutes, and be sure that no more than 12 hours passes.

Using Drano can be an optimal choice for unclogging your stubborn drain, but it is important to know how long to flush Drano with hot water. While Drano can be a great product when used according to the manufacturer’s instructions, you should know that leaving Drano in your pipes for too long can be damaging.

Check out our related Drano articles: