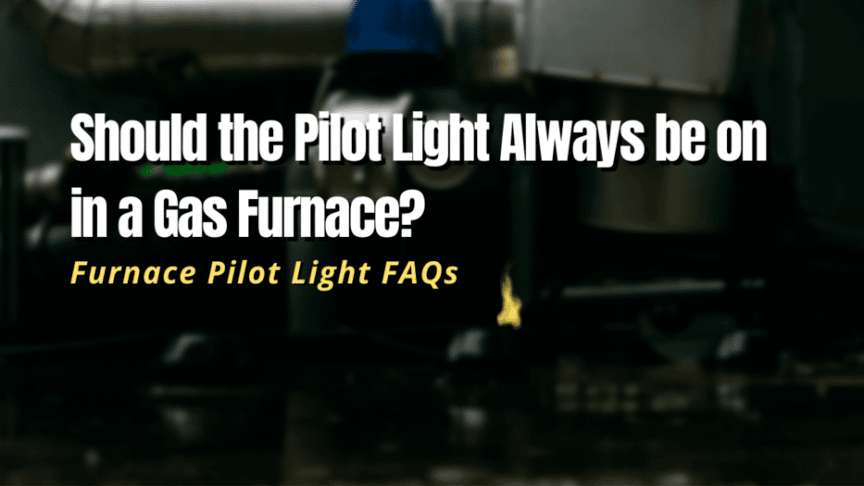 When it comes to gas furnaces, questions abound, especially if you have an older model that is unfamiliar. One big question about gas furnaces is whether or not the pilot light has to remain on at all times.

The pilot light in a gas furnace does not need to be on all the time. If the furnace is in use, the pilot light will certainly need to remain on in order for it to work. However, there are cases where the pilot light can be turned off and disconnected from the gas line.

In the summer, for instance, when the gas furnace is not in use, you can save money on your gas bill by shutting it down. The amount of money you’ll save is pretty minimal, so it’s not that important. Another reason to turn off the pilot light is that during the summer months, the heat produced by the pilot light can spread throughout the room.

If you’re unfamiliar with your gas furnace, especially the pilot light, we’ve gathered some further information that can ease your concerns about what to do with this appliance.

Is It Dangerous If The Pilot Light Goes Out On A Furnace?

Nowadays, most gas appliances come equipped with a safety mechanism called a thermocouple that shuts off the gas if the pilot light goes out. This prevents any dangerous buildup of gas.

How To Tell If The Pilot Light Is Out On Furnace?

The first clue is that your furnace is no longer keeping your house warm. Usually, a furnace will have a small window or opening where you can peek in and see if it’s still on. Look for a small blue flame coming from a thin pipe. If you don’t see a flame, then it’s definitely out.

What To Do If My Furnace Pilot Light Won’t Light?

This might mean that the gas line has been turned off. Check the on-off valves along your gas line to make sure gas is coming through. If you don’t hear gas hissing out of the pilot light, call your gas service to see if there’s an outage of gas.

If your furnace has been in disuse all summer and you’re starting it back up, check for an on-off switch. Even though gas furnaces primarily use gas, some also have electrical components that need to be on in order for everything to work.

Another possibility is that you’re not holding the flame of your lighter or match up to the pilot light long enough. Sometimes, it can take up to 20 or 30 seconds for the pilot to re-light.

Pilot Light is Blowing Out When Furnace Kicks On, What’s the Issue?

There are a few reasons for this to happen. The first thing you can do is check the gas valves and make sure they’re open all the way. There might be enough gas to light the flame, but a weak output won’t be able to sustain the flame.

Perhaps the most common cause is a clogged pilot light and/or thermocouple. Especially in basements and dusty storage rooms, soot and dirt accumulate inside the furnace, requiring a good annual cleaning.

The furnace pilot light goes out occasionally, should I be worried?

You can do some troubleshooting to see if there’s an obvious reason for this. Same as mentioned above, a weak gas output or soot and dirt accumulation are the most common culprits of this problem.

Another possibility is that a draft is blowing out the flame. To check for this, re-light the pilot and watch the flame for a moment. If the flame flickers or wobbles, try to determine if any air is passing underneath the furnace.

If you have an old appliance that looks a little worn-down, or if you’re generally uncomfortable with the task of dealing with your gas furnace, simply find the gas line attached to it and turn the valve to the ‘off’ position. Then, call an HVAC technician and let the pro’s handle it.

If you take these easy safety measures, there’s nothing to worry about… except maybe your pocketbook, as it might be time to buy a new furnace.

If the pilot light goes out is gas leaking?

In most cases, no. As mentioned above, pilot lights usually have a safety mechanism that stops gas-flow if the flame goes out. It’s important to remember that even with the safest gas-fueled appliances, there is always a chance that a gas leak might occur. It’s a small chance, but one that shouldn’t be ignored.

Welcome to My Home Dwelling

Hi! My name is Jamie and this is My Home Dwelling, a blog where I have pieced together articles about all my home ideas. I have learned a lot while being a Realtor and a new homeowner, this website is all about me helping you with your home!

We are a participant in the Amazon Services LLC Associates Program, an affiliate advertising program designed to provide a means for sites to earn advertising fees by advertising and linking to Amazon and other affiliate programs. When you buy via the links on our site, we may earn an affiliate commission at no cost to you.