You have probably seen circulating videos of people setting their hands on fire using dish detergent. The experiment may get you wondering about its flammability. Dish detergent is a cleaning agent that comes in an array of choices from paste, liquid, gel, packs, or tablets. They are manufactured with some slight variation in their ingredients. Since dish detergent contains chemicals no matter the form, it raises the question, is dish detergent flammable?

Dish detergent is classified as a non-flammable and non-combustible cleaning agent. Some liquid dish detergents have flashpoints at above 115°F, while soaps and pastes have a flashpoint of 1000°F. A product is considered flammable only if its flashpoint, or minimum temperature to ignite the fire, is below 100F. Rest assured that your dishwashing detergent will not set your kitchen on fire at any time.

So, when is dish detergent flammable, or is there a possibility it might ignite? Here is our detailed discussion.

Dish detergent is generally a non-flammable product since its flammable ingredient is diluted and insubstantial. For instance, it contains SLS (sodium lauryl sulfate), a surfactant that facilitates the binding and foaming of dish detergent. SLS is flammable, but it is an inert or non-reactive ingredient in the washing detergent. Because of this, dish detergent will not ignite fire even when the product is near the surface.

All forms of dish detergent do not evolve any flammable gases and do not self-ignite.

What Happens if You Light Dish Detergent in Fire? 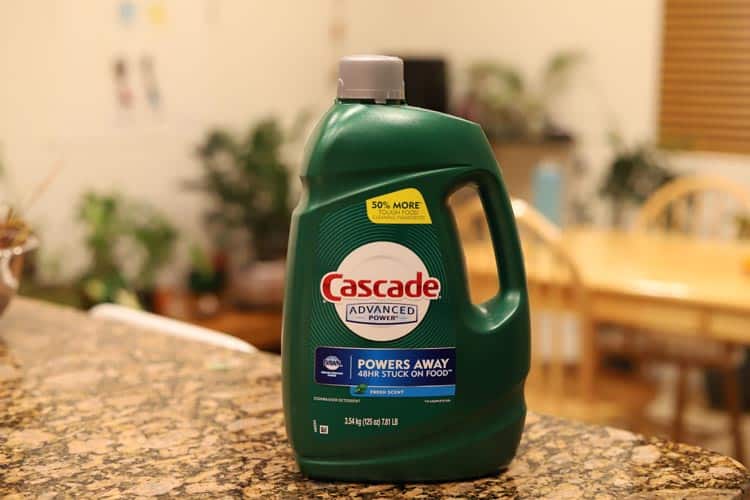 Let us go back to the chemistry experiment of people holding fire without burning their hands. The procedure is to froth the dishwashing liquid first and introduce a flammable gas like lighter fluid or butane. When the mixture is set on fire, it will burst into a flame before withering away.

Understandably, it is not the dish detergent that ignited the blaze but the flammable gas in it. The bubbles created after frothing the washing liquid trapped the gas inside it. It causes a burst of fire that is harmless in small amounts, but hazardous near combustible materials.

Lighting a dish detergent on its own will not cause it to burn. However, in theory, its ability of trapping chemicals and gas in its suds can become a source of potential fire hazard.

Dish detergent is a mixture of surfactant, fragrances, glycols, alcohols, or even phosphate in some brands. Most of these ingredients are considered fire hazards and irritants. But it only pertains to a pure solution and not to the mixture and dilution of the materials in dish soap. Thus, dish detergent will not ignite a fire at a temperature below its working condition stated above.

At maximum heat temperature, dish detergent soap will melt instead of burn. It is mostly because of their composition that prevents the decomposition of the chemical bonds. Dish detergent in liquid form has a slightly lower flashpoint, but it does not constitute flammability. These products may not even sustain a flame for long.

Is the Dish Detergent Container Flammable?

No, dish detergent containers will not catch fire nor explode even without ventilation.

Will a Dish Detergent Container Explode When Heated?

Any sealed container tends to explode when introduced to heat. The dish container will only melt when heated, but it will not explode.

Is Burning Dish Detergent Bad for the Environment?

Dish detergent is an essential cleaning agent in the kitchen. By itself, dish detergent poses as an environmental pollutant known to contaminate underground water. Burning the dish detergent in small amounts may not do much harm. But in large amounts, it can release substances like carbon oxides, sulfur oxides, or nitrogen oxides. These materials are hazardous to the environment and may cause damage to the atmosphere.

Is it Dangerous to Inhale Burning Dish Detergent Smoke?

Inhaling smoke from any burning object, including dish detergent, has a far-ranging health hazard. Its noxious fumes can cause airways and breathing problems. Throat swelling that comes after inhaling the irritants can be life-threatening. Frequent exposure to dish detergent fumes can even cause cancer.

Are dishwashing pods and tablets flammable? 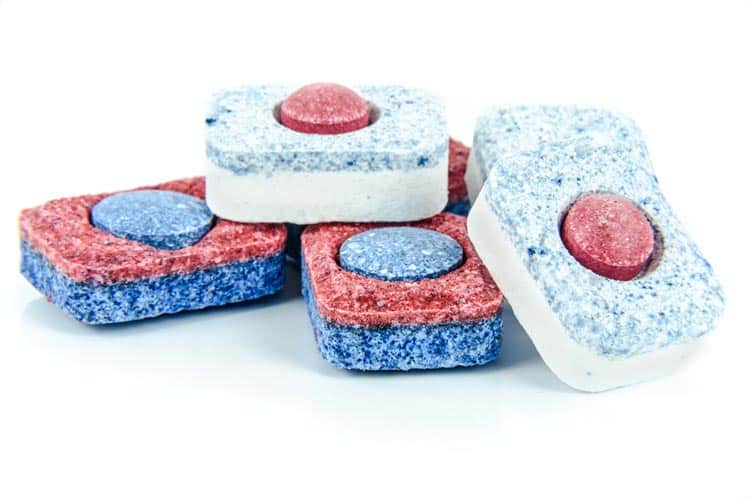 Dishwashing pods and tablets are concentrated solutions of dish detergent. Its material composition is similar to liquid dish detergent and soaps. Thus, they are also non-flammable, non-combustible, and non-explosive.

What happens if you boil dish detergent?

Boiling dish detergent will cause the water in the product to evaporate. It will soon decompose all the ingredients to the point where it will generate toxic fumes. Boiling, heating, and burning dish detergent are unsafe for the health and environment.

When combined with rubbing alcohol and hot water, dishwashing liquid can speed up the melting process of icy and snowy surfaces. It also prevents further icing. All you have to do is mix 1 tsp of dishwashing liquid such as Dawn and 1 tbsp of rubbing alcohol in ½ gallon of hot water. The mixture will bubble up when poured into icy and snowy surfaces resulting in the melting of the ice.

Dish detergent is a nonflammable cleaning agent extensively used in the kitchen. While it cannot ignite a fire on its own, dish detergent also has its potential hazard. The grease and gases will be trapped in the soap bubbles and can cause a small flame when ignited. The flame can spread and create bigger damage when it is lighted near any combustible material. That is why you still need to handle it with care.