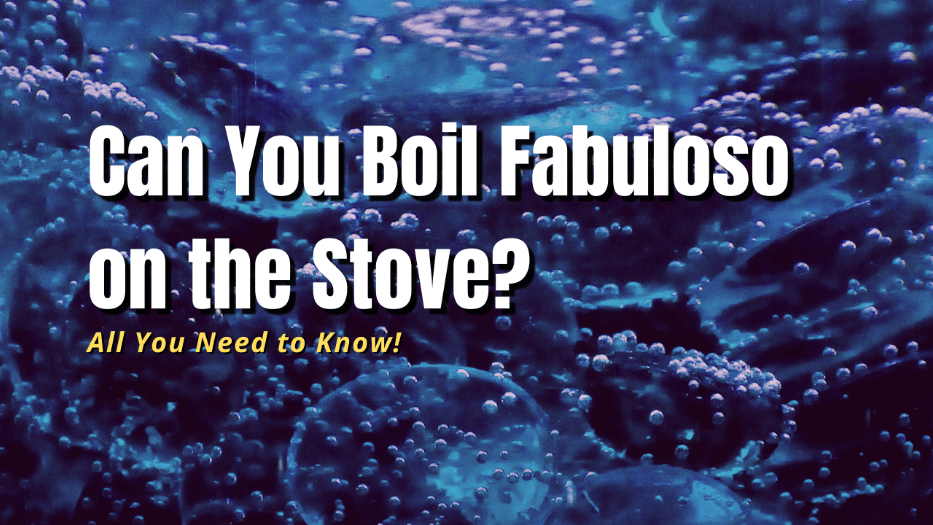 Multi-purpose cleaners are one of those household staple items that everyone has but not much thought is given to which cleaners are a favorite and why. Fabuloso, a multi-purpose cleaner invented in Venezuela in 1980, quickly became a household favorite with its presence reaching Mexico and eventually the USA in 1996. One of the main reasons it grew so quickly in popularity was due to its pleasant and alluring scent. Fabuloso’s scents are so well-liked that people began to use them as home fragrances by heating them on the stove.

Fabuloso and poison control centers have clarified that Fabuloso is not to be boiled or heated in any way. Fabuloso should only be used for its intended purpose as a household surface cleaner. Heating Fabuloso can aggravate skin conditions, Asthma, and other respiratory issues.

Aside from being an irritant, there are a few other hazards related to boiling Fabuloso. While it seems to be common sense to not heat household cleaners to avoid releasing chemical irritants into the air, you may be wondering why this became a common trend in the first place.

Why Do People Boil Fabuloso?

Fabuloso is marketed as being a multi-purpose cleaner good for floors, bathrooms, kitchens, and bedrooms, available in a selection of delectable scents. While effectively cleaning, Fabuloso deodorizes the area at the same time, claiming to leave a lingering scent for 24 hours after use.

Because it is revered for its pleasant, lasting scents it became a household DIY air freshener of sorts with people boiling Fabuloso in a pot on their stove, sometimes adding other fragrant items like Downy or cinnamon sticks. This practice persisted in some households because it was not well-known and passed along by word of mouth among friends and families.

What Happens if You Boil Fabuloso on the Stove?

With the rise of social media platforms like Reddit and Instagram, people began sharing about their longtime use of Fabuloso, boiled on their stoves to fragrance their homes. As this trend was shared, it was quickly critiqued by news networks and poison control centers to stop the misuse of this household cleaner, as displayed in this video below.

When Fabuloso is boiled or heated in any way, it vaporizes, releasing its chemical components into the air which can be irritating to anyone with breathing difficulties and can aggravate skin conditions, Asthma, and other respiratory symptoms.

Is Fabuloso Dangerous to Inhale?

Fabuloso is potentially dangerous to inhale. One of the ingredients found in Fabuloso, called Glutaraldehyde, is listed by the CDC (Centers for Disease Control and Prevention) as possibly causing the following symptoms: dermatitis, burning eyes, wheezing, Asthma, difficulty breathing, nasal, lung, and throat irritation. This ingredient’s uses are all confined to cleaning and sterilizing purposes and should not be used or inhaled as an air freshener.

Why You Should Not Boil Fabuloso

The final resounding verdict is that Fabuloso should not be boiled, with the company itself and poison control centers warning of health hazards if it is used outside of its intended purpose. Heating or boiling this cleaning agent can cause it to release its chemical components into the air making it hazardous to inhale.

Other Safety Hazards of Boiling Fabuloso

As is the case with any chemical cleaning product, Fabuloso should not be placed or stored in any other vessel outside of its original labeled bottle. Because Fabuloso comes in a variety of translucent colors, if removed from its bottle, it can look like juice. This is particularly a concern for households with children although adults can experience this mix-up too.

Another concern about boiling Fabuloso on your stove is that guests and other members of your household may not be aware that a specific pot has been used to boil a cleaning product which could result in food contamination and illness if ingested.

Can I Use Fabuloso in my Oil Diffuser or Wax Warmer?

No, Fabuloso is intended for cleaning purposes only and should not be heated or used as a room fragrance in any way. It is best to use essential oils, wax melts, and air fresheners designed for safe inhalation instead.

Can I Use Fabuloso in a Humidifier?

Since Fabuloso should be used for its intended surface cleaning purposes only, it is not recommended to use it in a humidifier. Warm-mist humidifiers can vaporize the chemical ingredients of Fabuloso into the air irritating your skin, eyes, and respiratory system.

If you wish to use a fragrance in your humidifier, you can add a few drops of your favorite essential oil for a healthy, aroma-therapeutic option.

What Happens if Someone Drinks Fabuloso?

Because of its packaging and translucent brightly colored solutions, Fabuloso can potentially be confused for juice or sports drinks, especially if it is stored in anything other than its original bottle. The current manufacturers of Fabuloso, Colgate-Palmolive, have been contacted regarding a potential design change to lessen this risk which is being addressed.

A physician from Darnall Medical Center in Texas who has treated patients who have accidentally ingested Fabuloso stated that it is luckily a “mild gastrointestinal irritant and is unlikely to cause any serious illness.”

Even though symptoms can be mild (usually vomiting or diarrhea) in-depth studies have not been conducted on ingestion related to factors like age and weight of the person who ingested it. If you or someone you know drinks Fabuloso, it is recommended to call your state or provincial poison control center and follow advice on whether or not to seek further medical attention.

Fabuloso is a bleach and ammonia-free cleaner with a neutral pH level, making it safe to use on any surface.

What Does Fabuloso Recommend?

Fabuloso recommends that the multi-purpose cleaner only be used for its intended purpose and should never be heated. Carefully read and follow the directions outlined on the label of the bottle.

What Homemade Air Fresheners Can I Use?

While you should never make home air fresheners from chemical cleaners, there are some natural options you can boil on your stove, that will leave your home smelling inviting and comforting without the health hazards.